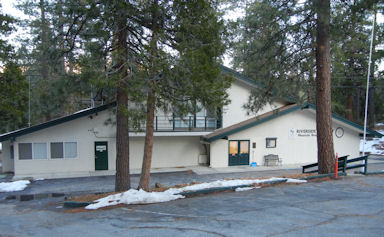 The California Department of Forestry and Fire Protection (CDF) formed the California Fire Safe Council with the intent of seeing that local fire safe councils were formed with the single charge of educating the local public about fire abatement practices that can save their homes in the event of a fire.

The Mountain Communities Fire Safe Council (MCFSC) was formed in 2001 and became a 501(c)(3) corporation in 2002. We quickly saw that while the single CDF charge was certainly necessary, it did not go far enough. The communities of the San Jacinto Mountains are mostly surrounded by National Forest — a forest that has been under-managed for more than a hundred years. While that under-management was based on a misunderstanding of the role fire plays in nature and in the maintenance of habitat, it nonetheless has created havoc within both the agencies deemed responsible for the forest and for the forest itself and its wild inhabitants.

Many people who now live in the San Jacinto Ranger District came here as flatlanders thinking that all these trees were really neat. We slowly came to understand we had chosen to live in a keg of dynamite. The 40 trees per acre (33 feet apart on average) forest no longer exists in North America with rare exceptions in Mexico. We realized that we were surrounded by 2,000-3,000 trees per acre. It was with this shared knowledge that the MCFSC took a new direction.

We began to push for thinning both of the forest and within the community. We formed a group of volunteers we came to call the Woodies. This group was founded by dedicated people who often provided the use of their own chain-saws, trailers, log-splitters and tractors. The Woodies began to remove trees on private property for individuals, donating the resultant firewood to a local agency for those less fortunate. By the end of 2009, the Woodies had received grants to purchase their own equipment and continue to do abatement on properties where the owner cannot afford the 1/4 to 1/3 cost of an MCFSC contractor. They have contributed more than 500 cords of firewood to the Idyllwild Help Center and volunteered more than 16,000 hours. In 2008, a new, similar, affiliated group, calling themselves the "Tumbleweeders" formed in the Anza Chapter.

When the massive die-off of both conifers and manzanita began, we started talking seriously with the U.S. Forest Service about thinning our beloved forest. As a result of that effort, MCFSC formed a partnership contract with the Forest Service, taking on a major role in the creation of what is now known as the Pine Cove Fuel Break. That is, we worked two days a week at what we do best; thinning (mostly) dead trees and brush to create a park-like area from 300-500 feet wide around the perimeter of the community of Pine Cove, one of the areas most sensitive to a fire coming up a canyon. Since that original effort, the Forest Service has continued to create fuel breaks around the Idyllwild/Pine Cove communities.

Early in 2003, the MCFSC received its first USFS funded grant to hire contractors to work on a cost sharing basis with the property owners. In 2004 they hired a field supervisor to meet with property owners, make a work plan, get bids from contractors, verify that the contractors complete the work according to the plan, document the work photographically, and authorize payment to the contractors. A typical grant covers between 2/3 and 3/4 of the cost of the abatement.

In 2009, the MCFSC received a FEMA grant to replace 100 shake and wood shingle roofs with fire resistant roofing material. They successfully completed the grant in 2016.

As our abatement program evolved so did our educational outreach activities. We have developed a well-received program used in the local school; our newsletter goes to the approximately 8,000 property owners in our database; from time to time, we hold public meetings with programs on fire safety. We have found the one-on-one interaction between our project managers and property owners to be a most effective educational activity.

The secret to our success thus far is the willingness, no, the eagerness with which our people dig into the resolution of problems within the community. Every year, MCFSC's 20+ member volunteer crew named the Woodies donate thousands of hours doing fuels reduction work on properties of disabled, elderly and low-income individuals plus they process trees removed from the abatement jobs into firewood for distribution to the needy by the Idyllwild Help Center. The value of their time plus the value of the wood is used as a match for the grants.

Below are the statistics for the work completed by Mountain Communities Fire Safe Council, Feb. 2006 through Aug. 2018– 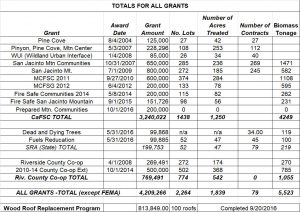