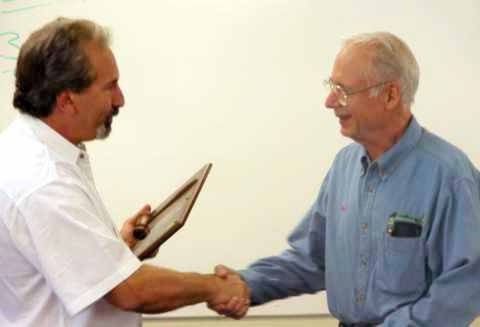 On Saturday, July 8, 2006, Riverside County 3rd District Supervisor Jeff Stone presented Blair Ceniceros a plaque from the County commemorating his tenure as President of the Mountain Communities Fire Safe Council. Ceniceros began his leadership as president of the MCFSC in 2003 and stepped down in May 2006. He will still be part of the Council as a board member.

As a new organization, Ciniceros guided MCFSC by establishing its course, a direction which continues to this day. During his tenure, MCFSC has accomplished as much or more than any fire safe council in the state. It has received over $2 million in grants to assist property owners in fire abating their property, in addition to purchasing necessary equipment for work to be performed in the community. Blair organized The Woodies, a volunteer group of citizens who perform abatement for homeowners in need, chop and donate firewood to the Idyllwild Help Center, in addition to arranging educational events for schools and the general public. Ceniceros met with local, state and federal politicians on the needs of our community and he has actively worked with other agencies through MAST to accomplish goals of the organization.

One of the highlights of Ceniceros’ tenure has been the development of positive working relationships within the local Riverside County fire agencies, CA Department of Forestry and Fire Protection, USDA Forest Service and MAST. A final accomplishment before stepping down as President, Blair developed the Community Wildlife Protection Plan, a multi-agency effort with Ceniceros and his wife Kay at the helm. This plan was recently approved by the Riverside County Board of Supervisors and can serve as a model for other local communities.

MCFSC thanks Blair immensely for his tenure as president and looks forward to his continued guidance as a board member.